What are the best natural compounds to use as sleep aids (backed by science)? 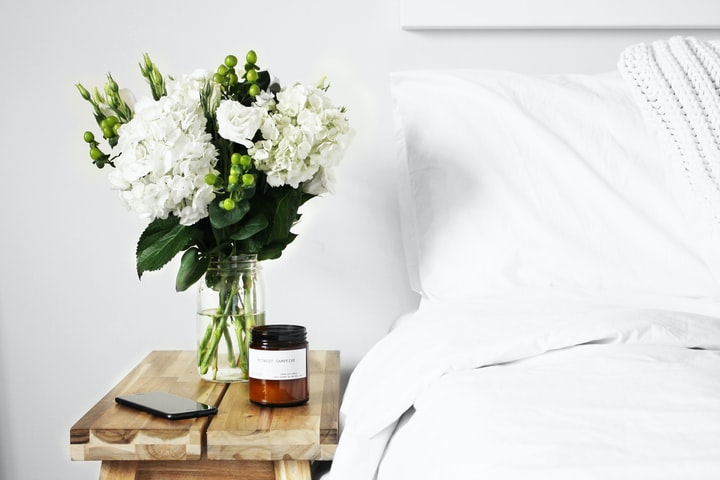 From plants that wake when others sleep, from timid jasmine buds that keep their odour to themselves all day, but when the sunlight dies away let the delicious secret out to every breeze that roams about. — Thomas Moore Sleep Yin-Yang

In the traditional Chinese medicine (TCM), sleep is part of the natural rhythm of Yin and Yang in the body. In this concept, Yin represents passive forces while Yang represents active forces.

The Yin energy of the body is cooling, calming and restorative. It correlates to sunset and nighttime, when our bodies turn inward, slow down and take time to regenerate. Conversely, daytime correlates with the concept of Yang, which is expansive, stimulating and warming.

In other words, throughout the day there is an increase of the active Yang energy and a decrease of the slower, quiet, calm Yin energy. When an imbalance of Yin and Yang occurs, insomnia can result.

Sleep is also believed to be regulated by the cycle of Protective Qi (Wei Qi) and Nutritive Qi (Ying Qi).

Wei Qi is a type of qi (your life force) which is produced by the combination of the air you breath with the nutrients you absorb from food. The function of Ying Qi is transformation into blood to nourish the whole body, especially to nourish the internal organs and maintain their physiological functions.

The Wei Qi has a Yang property and circulates through the body 50 times per day. During the day it flows along the Yang meridians (meridian is the concept of an “Organ Clock”) for 25 times (in the bladder, small intestine, gallbladder, triple heater, stomach, large intestine). At night it enters the Yin meridians 25 times (in the heart, kidneys, lung, liver, spleen). The cycle in the day enables the body to be active and awake, while the cycle at night enables the body to rest and recharge.

-﻿The circadian rhythm (the daily rhythm of our genes and our internal clocks, (Circadian Clock Genes). A 24h rhythm organised by a body-wide network of endogenous circadian clocks.

-﻿The meridian clock, that tells time as an illustration of the path of qi.

-As well as the syzygial rhythm (the lunar rhythm). For example, it is stated in Suilu Article of Spiritual Pivot that at the full moon, sea water flushes to the west and human qi and blood are accumulated with strengthened muscles, tight skin, strong hair and compact texture. But at the wane sea, water flushes to the east and human qi and blood are weak, with Wei Qi gone, figure alone (without essence), shrunk muscles, flabby skin, open texture, sparse hair and thin muscle texture.

-The seasonal rhythm (annual rhythm). For example the human seasonal rhythm is discussed most in Huangdi’s Canon of Medicine, and is embodied in rotated duties of the Five Zang organs. Liver is on duty in spring, heart in summer, lung in autumn and kidney in winter. Based on all combined the above four rhythms, TCM has developed a theory in harmony between human and nature to clarify the rationale behind the biological rhythm (Human biological rhythm in traditional Chinese medicine).

Moreover, Western medicine tells us that the ideal time to sleep from 10pm to 6am is not true for everyone. For example, the “farmer” genotype goes to sleep at 9pm until 5am, while the “owl” genotype has a chronic dysregulation from a normal person’s circadian rhythm (Circadian Clock Genes, Sleep the shutting of the eye: sleep duration and genes), and its sleeping schedule is from 4:00am to 1:00pm. Simply because we are genetically different when it comes to sleep.

But lets' assume for a moment that the normal sleeping schedule (based on the circadian clock) is from 10–11am until 5–6pm ideally for everyone, let’s see why is important to follow that schedule.

Between 10pm and 2am, melatonin (the sleep-promoting hormone made by the pineal gland) influences the growth hormone (GH) secretion, as a result 80% of the GH is produced during this time to help the body burn fat, repair collagen, regenerate lean body tissue, improve bone density and enhance immunity. In other words, when you go to bed by 10–11pm, you are allowing your hormones to heal, repair and restore effectively.

In fact, the most regenerative and deep sleep occurs between 10pm and 2am while after 2am you are in lighter sleep. Moreover, according to TCM between 11pm and 1am your gallbladder is more active, while your liver is more active between 1–3am, making your liver more efficient in detoxification. So, since the gallbladder and liver start to regulate your qi at around the same time, you should aim to be fast asleep by 1am.

However, your inability to obtain sufficient sleep, difficulty falling asleep or being unable to asleep throughout the night — due to insomnia, stress, work, babies, age, food, climate etc — therefore your inability to go to bed by 10–11pm is recognised by TCM as a fundamental imbalance of energy, and is treated with acupuncture. In the Western world the same problem is treated with pharmacological intervention or with the use of herbs.

The commonly used hypnotic drugs in the Western world are benzodiazepine and non- benzodiazepine sedative-hypnotics, that often are related to negative side effects:

Given these concerns, it is important to offer patients with insomnia sleep aids based on plant extracts that may improve their sleep.

These sleep aids based on plant extracts are generally safe and well tolerated by the population, but there is a scarcity of evidence on the efficacy of each product in clinical studies.

Hopefully, in this review (Plant Extracts for Sleep Disturbances: A Systematic Review) they screened the PubMed database up to 05/03/2020, for data from randomized, double-blind, placebo-controlled trials, noncontrolled trials, and cohort studies conducted in children and adult subjects, where seven emerging compounds (plant extracts and nutraceuticals) were tested for sleep disorders.

From their analysis, and excluding duplicates, nonrelevant articles, reviews, and works with no full article available, 35 relevant reports were reported and the 7 emerging compounds are:

Valerian (Valeriana officinalis, Caprifoliaceae) is the most studied plant for sleep disorders. In the 17 articles selected, the results of clinical trials testing valerian as a sleep aid were controversial and conflicting.

Some trials investigated the possible mechanism of action of the effect of valerian as sleep aid, and a study showed that a single oral dose of Valeriana officinalis extract caused a significant reduction in intracortical facilitation in humans, a change associated with reduced anxiety.

In vitro, Valerian can bind to gamma hydroxybutyric acid (GABA) receptors. GABA is an inhibitory neurotransmitter widely distributed throughout the central nervous system that enables the body and mind to relax, fall asleep and sleep soundly throughout the night. Low GABA activity is linked to insomnia and disrupted sleep.

In 2010, it was demonstrated in a double-blind, randomised study with 77 subjects that silexan — an oral lavender (Lavandula) oil capsule preparation — is as effective as lorazepam (a benzodiazepine medication sold under the brand name Ativan among others) in adults with generalised anxiety disorder.

Two studies in 2010 and 2015 used a dose of 80 mg of silexan and showed significant improvement in sleep quality and anxiety compared to placebo.

Finally, an open-label trial with silexan and 47 participants indicated a reduction of nocturnal awakening frequency and duration after 6 weeks of assumption of the food supplement.

Hops are the flowers (also called seed cones or strobiles) of the hop plant Humulus lupus, a component of beer. Like valerian, hops has a long history of being used to help improve sleep. Is a sedative plant whose pharmacological activity is due principally to its bitter resins. The mechanism of action of the resin of hop consists of increasing the activity of the neurotransmitter γ-aminobutyric (GABA), inhibiting the central nervous system.

A double-blind, randomized placebo-controlled trial on 171 volunteers with sleep difficulties reported no significant changes in sleep quality after assumption of the LZComplex3 (hops 500 mg) for 2 weeks.

Another study with 101 volunteers with chronic primary insomnia assuming two gelatine capsules of Cyclamax® (50 mg hop) per day for a month, showed no effects on sleep quality, melatonin metabolism and sleep-wake cycle.

﻿Chamomile is one of the most ancient medicinal herbs known to mankind. The word “chamomile” (derived from Greek khamaimēlon) means “earth apple”. The dried flowers of chamomile contain many terpenoids and flavonoids contributing to its medicinal properties. Chamomile preparations are commonly used for many human ailments such as hay fever, inflammation, muscle spasms, menstrual disorders, insomnia, ulcers, wounds, gastrointestinal disorders, rheumatic pain and hemorrhoids.

In another study, they studied the effects of drinking chamomile tea on sleep quality in “sleep disturbed postnatal women” and found a modest improvement in the postpartum sleep quality scale at 2 weeks but not at 4 weeks.

But in a pilot trial with 34 subjects with primary insomnia they found no significant improvements in sleep quality.

The sedative effects of chamomile may be due to the flavonoid, apigenin. Apigenin acts as an antagonist of GABA-A and GABA-C receptors. Apigenin has also been recently studied for additional properties, including anti-inflammatory effects, although the relationship between these and possible sleep inducing effects is still speculative.

A double-blind, randomized, placebo-controlled study with 264 subjects showed a reduction in scores for anxiety. No trial investigated directly the effects of hawthorn on sleep disorders.

﻿Hypericum perforatum, known as perforate St John’s-wort, is a flowering plant in the family Hypericaceae. Although used in traditional medicine with possible antidepressant activity, high-quality clinical evidence for its effectiveness remains absent, as of 2020.

Many clinical trials tested the herb St. John’s wort for mild to moderate depression. A study reported that 900mg of St. John’s wort decreased scores of the sleep problem scale compared with placebo in perimenopausal women after 12 weeks of oral administration.

﻿Salvia rosmarinus, commonly known as rosemary, it is a member of the mint family Lamiaceae. Several phytocompounds presenting pharmacological activities may be isolated from essential oils and extracts of rosemary and are responsible for implement several pharmacological activities, such as anti-inflammatory, antioxidant, antimicrobial, antiproliferative and antitumor.

A randomized clinical trial on subjects who received 500mg of rosemary showed a significant improvement in sleep quality after one month, but not in sleep latency and sleep duration.

Finally, some clinical trials investigated the combined effect of different plant extracts on sleep related problems, and the most studied combination of ingredients was valerian and hop.

It was reported that a single dose administration of a valerian and hop fluid extract improved total sleep time and quality of sleep in poor sleepers. A mixture of valerian, passion flower and hop extract had also significant improvements in sleep time, sleep latency, number of nightly awakenings and insomnia severity index after a 2 week treatment.

People say, "I'm going to sleep now", as if it were nothing.

But it's really a bizarre activity. "For the next several hours, while the sun is gone, I'm going to become unconscious, temporarily losing command over everything I know and understand. When the sun returns, I will resume my life."

So, next time you see someone sleeping, make believe you're in a science fiction movie. And whisper, 'The creature is regenerating itself.” ― George Carlin, Brain Droppings