The "government" is not the answer to big tech "monopolies"

Do you really need them? is the question you should be asking yourself. It is the question that I asked myself quite some time ago when a friend of mine came forward telling me the dangers of various apps and websites that it seems everyone uses to some degree. I, like most people, have a Facebook account but I haven't posted to it in about a year because the environment was becoming (and I presume still is) incredibly toxic. Old friends and family members turning on one another and saying the most awful things in a forum that everyone else can see. NONE of these people would have behaved that way face to face. Instagram is FB, so while things tend to be significantly less toxic there there is always that possibility for it to blow up as well.

Now lately, when it becomes evident that the big guys are all in it together, you need to ask yourself regardless of your political affiliation: Do you really enjoy having a handful of people control your online life?

When Parler went to number one on the app store only to be almost immediately removed from availability citing something along the lines of "violence" you need to be worried about who is controlling your ability to get things. Alternative methods that that people could use to acquire the app (it isn't that difficult, you just have to cut the cord of the Google Play Store in order to do it) and then the reponse of the industry was that the people who control Parler's servers decided to stop allowing them to use them.

I never liked Twitter, I signed up for an account many years ago and only used it a couple of times. I found it to be a bit self-indulgent and was just a place for celebrities to get into arguments with one another in a truly stupid manner. Before the tech oligarchs decided to try to eliminate Parler, I signed up for an account only to discover that it is just as banal as Twitter in that it is exactly the same thing. There is very little chance that I am ever going to use it either.

This is not the point of what I am trying to say here though. I do not like the idea of any entity, regardless of what industry or aspect of society that they are involved in, controlling too much of anything. This is why I am deeply anti-government, this is why I shop at small stores instead of chains whenever possible, this is why I engage in smaller platforms of social media like the one we are using right now. I don't like the idea of any group of people controlling too much.

It didn't happen quickly, but the guys above now control a great deal of what you have access to in your life and I do not like the idea behind it. I remember a time when Google was just some search engine that very few people had heard of: We were all using Yahoo or Webcrawler or my personal favorite Dogpile at the time. I remember when Facebook was something that only a few of my friends even had and most of us normal folks thought it was stupid. I remember when Amazon only sold books and was barely managing to exist as a company. Microsoft was always an oligarch because they got there first and well, Bill Gates went to court over his suppression of then superior web browser Netscape. 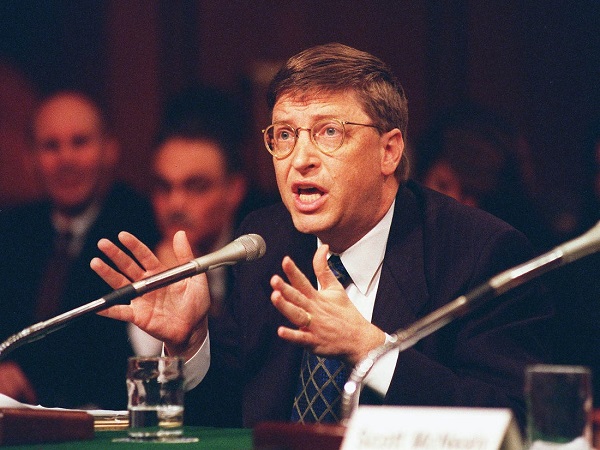 I don't remember the details exactly or even if it is entirely true but the government made him pay something obscene like $100,000 a day until he broke up what was ruled a monopoly, and rather than immediately comply, he simply paid the fine. This sort of wealth is awe-inspiring.

Now I am not suggesting that I want the government to break up these companies - that goes against everything I believe in. However, we the people have all the power that we are willing to go out and take. You in fact DO have a choice to either use or not use these products and I suggest that we the people do so.

I have never been a fan of Apple products because they and their users have always seemed to me like a cult. Plus I don't think Apple products are expensive, I just think they are overpriced. The "guts" of a MacBook Pro, if you built it yourself, would cost about half what they charge for it. That ridiculous monitor stand that they sell for $1000 was so laughable that I thought it was a joke (it wasn't.)

I don't use Amazon because I don't like what happens to local businesses that can't possibly compete with their prices. I don't use Microsoft because they have gone down the path of keeping us all stupid by having your machine do everything for you and you never learn anything as a consequence. Plus I feel as though they intentionally make their OS so bogged down with unnecessary features that you need to upgrade your machine every year or so just to keep up. For the average person using any of the Linux distros will accomplish the exact same thing unless you are gaming - then I'm afraid you have little choice but are probably spending a fortune on a gaming rig anyway.

I switched to protonmail a long time ago and am happy to support them. To be honest I don't do a great deal of sending out emails anyways unless it is with clients. It all seems a bit like a modern day fax machine to me as far as communication is concerned.

When I see people whining about the fact that big tech is a monopoly my response is they are only that way in your life because you LET them be.

There are alternatives to everything out there, you just have to be willing to cut the cord to make it happen. Installing apps using an APK installer is more difficult than the one button Playstore or whatever Apple does sure, but are you really so stupid that you can't read a 300 word article about how to make that happen? It works buddy, and you feel a sense of achievement once you manage to figure out how to press 1 or 2 more buttons than you would normally have to and all this without being lead down whatever path Google wants you to.

When people start talking about how the government needs to get involved to break up these companies I say STFU and GTFO. The government shouldn't be involved in any of this. YOU have a choice, you can use a wide variety of alternatives to Twitter, Facebook, Google, Gmail, Windows, YouTube or (insert the name of whatever dominant app or website exists here) also.

Users create the competition, not the government. The government is good at only two things: Taxes and war. So get out there and find an alternative. I promise you that you will feel better afterwards.