Some spooky sensation that actually happens to me: "The Call of the Void"

I consider myself a rather mentally stable person. I am not depressed even though my life is routine, I exercise, I have a pretty great social life, and I have a doggo that keeps me happy every single day. I also get to live somewhere that is pretty awesome and costs very little and am financially stable. So why on earth would I have feelings of doing something totally crazy every now and then? It turns out that I am not the only person who has these thoughts and there is a term for it. It is called "l'appel du vide" or "The call of the void."

This phenomenon is mostly related to being in high places, where a fall would cause very serious injury or death and feeling compelled to jump, or being in any other potentially deadly situation and having thoughts about the same thing.

I experienced something like this a few weeks ago when I was on a motorbike taxi the other day to another nearby beach town where I started wondering if I should jump off the back of the bike while it is moving really fast.... Of course I didn't do so but I found myself gripping the bike very tightly to prevent myself from doing so. I am afraid of heights for this same reason and approach ledges, even if they are very safe ledges with the same trepidation for the same reason. 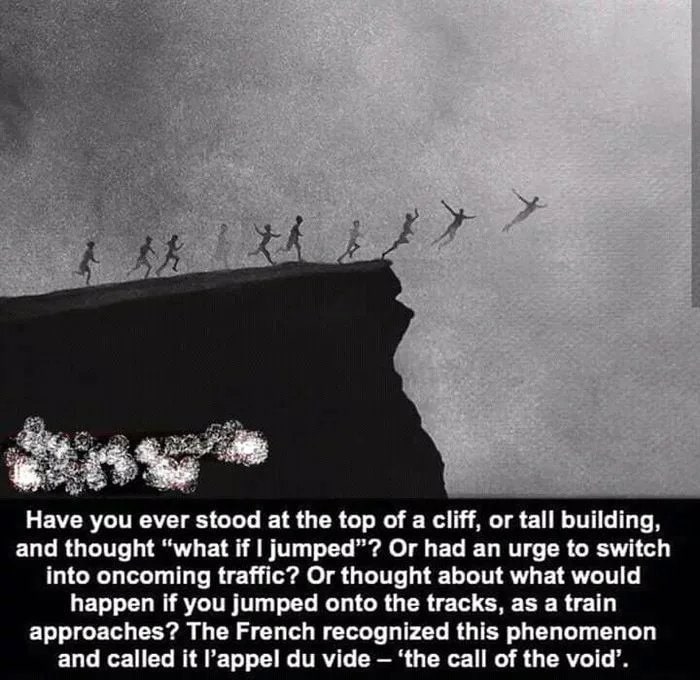 What a spooky widespread phenomenon this is huh? According to the only study that has been done on this phenomenon it is not associated with suicidal thoughts or any sort of mental illness - it's just one of those things that happens to a lot of "normal" people and is also referred to as HPP or "High Place Phenomenon." The study showed that of nearly 500 people evaluated found that nearly half of the people who had never had any sort of suicidal thoughts had experienced "HPP" more than once in their recent past.

It isn't just jumping from cliffs or tall buildings, but also includes thinking about swerving your car off the road for the hell of it, touching electrical wiring, and throwing yourself on train tracks. I guess we can add "throwing yourself off the back of a motorcycle taxi" to that list as well.

I'm curious if any of you out there in internetland have ever experienced this: Like I said, I am a normal, happy, successful person who has no reason to want to kill themselves, and this is something I experience every now and then.