How the NFP Report Can Shape Trading Trends

The nonfarm payroll (NFP) is a crucial indicator for the US economy, which causes considerable shifts in the markets. NFP data release should be part of traders’ calendar for them to make informed decisions on making a trade. Information about NFP is released regularly on the first Friday of every month. The next NFP report is scheduled to come out this week, Friday, on October 2, 2020 at 12:30 pm UTC (8:30 am EST).

The Bureau of Labor Statistics releases NFP to provide data on workforce in the manufacturing, construction, and goods industries. It excludes the employees from farms, government offices, private households and those from non-profit institutions. The NFP reports the rates of employment and unemployment, and how well the United States business sector has performed over a period.

Employment is a major indicator for the Federal Reserve Bank for its stimulus and interest rate decisions. Because of this, the monthly NFP report can have a significant impact on several markets, including stocks, forex and commodities. High employment rates indicate that business is good and the US dollar is strong. However, it has negative effects on US indices such as Dow Jones and S&P 500.

When the unemployment rate is higher than normal, the economy is not performing well so the policy makers will try to stimulate it. This will lean to stimulus with lower interest rates and reduces the demand for the US dollar, and will most likely push more demand for safe-haven assets like gold and silver.

The NFP data released on August 7, 2020 for July 2020 made favorable consensus for the US economy as the US unemployment rate pinned lower to 10.2%, showing a significant difference from April, when official statistics showed 14.7% unemployment (although unofficially it may have been as high as 20%). There was a net change in NFP at 1.7-million jobs gained, and wages also climbed. In effect, the gold rally came to a halt on August 7, the day of the NFP release, as the US dollar gauged higher. 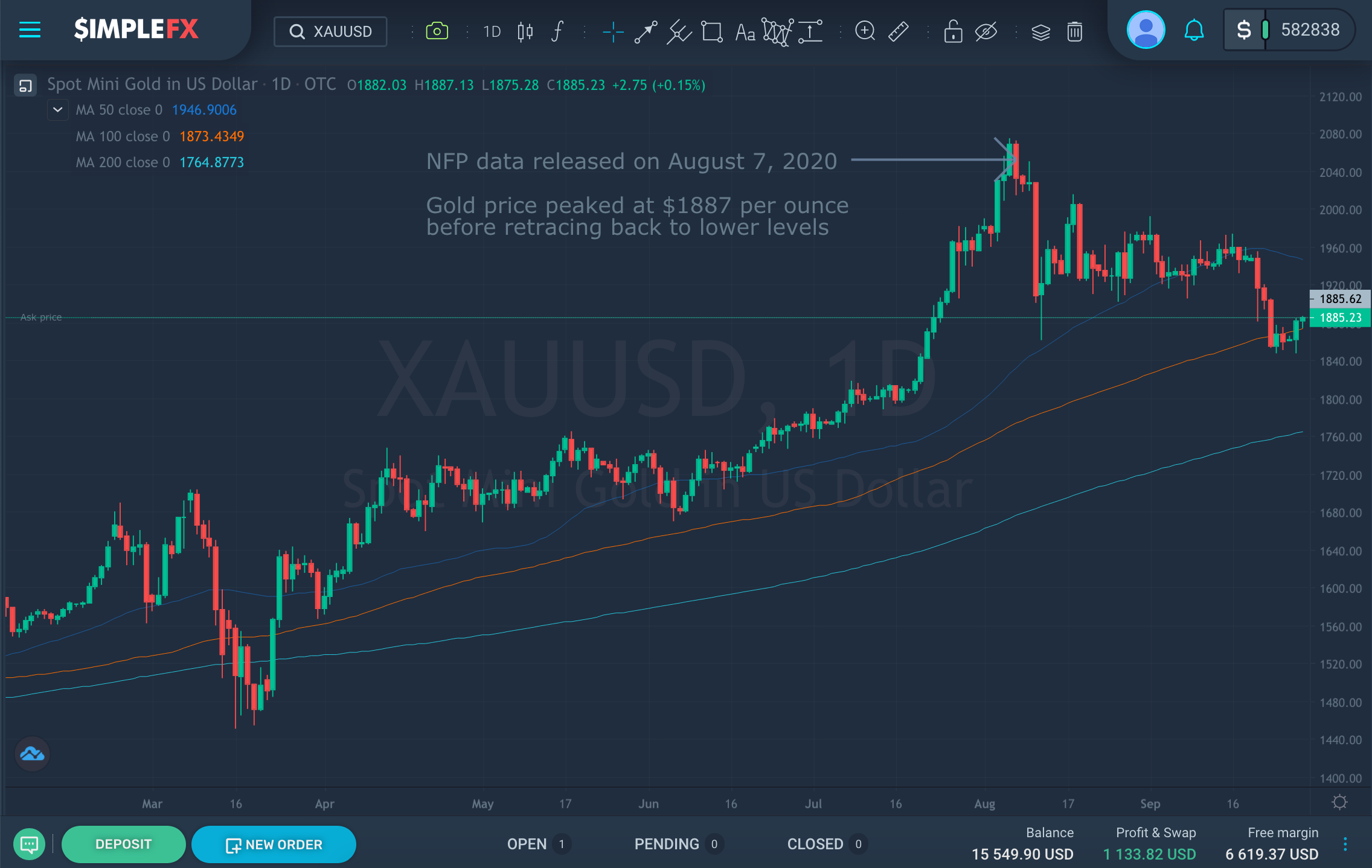 Analysts still expect that the downward trend will continue, highlighting an economy that is continuing to recover from the financial impact of the COVID-19 pandemic. According to a poll by Reuters, analysts expect that about 850,000 new jobs are added and that the unemployment rate dropped to 8.2%. That will be the least number of jobs that could have been added since May 2020. The average hourly earning is also expected to rise by 4.8%.

The period right after the NFP release can heighten volatility in several instruments, which is favorable for those who will take advantage of it. Trade the NFP and generate higher revenue from major short-term price drops and sudden jumps of interest.

The $2000 SimpleFX US Election Trading Cup is the perfect opportunity to ride the volatility. Just trade on the hottest symbols (EURUSD, SPX500, XAUUSD, and USDJPY) during the contest periods and reap more earnings! The contests run until November 1. It’s a great time to trade on margin at SimpleFX. Get your trading accounts ready!