"Giant against the world"

Education and training, games, and medical treatment have all begun to be passive, and the questions that countless people are basically concerned about are: when is real estate’s turn?

China is facing the "Volcker Moment". The government is willing to sacrifice short-term growth in exchange for the realization of long-term goals, including reducing dependence on foreign high-tech products, increasing the birth rate, and narrowing the gap between rich and poor.

Although the downward pressure on China's economy has gradually emerged recently, Lu Ting does not believe that the central government will once again loosen real estate regulation.

Mr. Lu Ting’s report, I believe there are more authoritative "Dana" to analyze more brilliantly and accurately. However, regarding the "Volcker Moment" mentioned in the report, there are a lot of things worth telling everyone about.

In "Volcker Moment", this Volcker is a person, his full name is Paul Volcker, and he is the former chairman of the Federal Reserve. By the way, when he was 80 years old, he was invited back by the Obama administration as a consultant. It can be seen that this person is by no means ordinary. 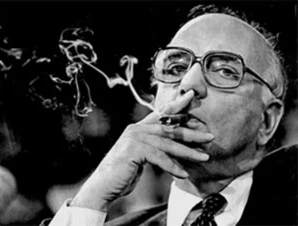 Paul Walker, moved with his parents to a small town in New Jersey in 1930. His father was the first mayor of the town. At the time when the Great Depression was approaching and the town was on the verge of bankruptcy, Walker's father held several jobs and set about rectifying the local finances. His father is also named Paul Walker (father and son have the same name...).

Volcker was an introvert when he was a child. The introversion and shyness may be because he is too tall. When Volcker graduated from high school, he was more than 2 meters tall. According to his own statement, he was extremely difficult to deal with the opposite sex, and he was too shy to date girls.

But he also has a suspicious side.

When Volcker recalled his father, he mentioned that there was a quotation from Washington in his office that impressed him:

"Don't let your kind nature be, and say yes when you should refuse. This is a public office, not a private one. If your choice is not conducive to your career, it will cause harm."

When Volcker was in college at Princeton, he was influenced by his father and professors. He was very suspicious, but he didn't hesitate when it was time to do something.

After graduating from the prestigious Princeton University in 1949, Walker went to Harvard University to study for a master's degree in political economy. In the early 1950s, Walker won the Lottery Ambassador Scholarship with honors and went to the prestigious London School of Economics and Political Science to study.

There is an episode here, that is, because of the relationship, Walker's thesis was not driven out in time, so he did not get his Ph.D. However, his later feat in saving the US economy, his level, let everyone early Just approved.

Walker's career has been smooth sailing. After finishing his studies in London, he got the opportunity to serve in important government agencies.

In 1962, Walker became the chief financial analyst of the US Department of Finance, and their main job was to maintain the US gold reserves. At that time, Volcker's leader Lussa once responded to the benefits of the U.S. dollar as a reserve currency for the United States:

Volcker left the Ministry of Finance at the end of 1965, when French President de Gaulle once said: "The United States enjoys the super privilege created by the US dollar and the tearless deficit. She used worthless waste paper to plunder the resources and resources of other nations. factory."

Volcker felt that De Gaulle was right at the time. The labor productivity in Europe has caught up with the United States, and the status of the US dollar may not be as strong as before. There are always surplus US dollars that can be exchanged for US gold. He left the Ministry of Finance and returned to work in the bank.

The dollar's hegemony fell, the giants rescued the market

In March 1968, under the lead of the French, a world run on the US gold reserves broke out. De Gaulle vowed to pull the US dollar from the dominance of world currencies, overthrow the Bretton Woods dynasty, and reform the global monetary system. Europe under the leadership of France must gain greater financial power. During Volcker's tenure at the bank, he saw the precursor to the collapse of the "Braden Woods System".

From 1969 to 1974, Walker served as the Under-Secretary-General for International Monetary Affairs of the U.S. Treasury Department. During this period, the U.S. government officially decided to decouple the U.S. dollar from gold. Walker was very supportive of this decision, and then the "Bretton Woods System" officially collapsed.

In the late 1960s and early 1970s, the Vietnam War greatly increased the government's fiscal expenditures. At the same time, the United States also wanted to engage in "welfare package" projects. These all required money. Without money, the US government began to print money madly.

With money, high inflation will follow. In 1973, the outbreak of the first oil crisis led to a sharp rise in prices in the United States and Western countries, which led to severe inflation. At the same time, the economy fell sharply and unemployment rose sharply.

Since 1973, the United States has seen the coexistence of low growth, high unemployment and high inflation.

When inflation first occurred, American politicians and mainstream economists considered it a short-term phenomenon. The prevailing view is that the rapid rise in international oil prices has created inflation, hit domestic investment, and led to a short-term economic recession.

However, after the oil crisis, international oil prices have gradually fallen, but inflation in the United States has intensified, and the unemployment rate and economic growth have fallen sharply. At this time, the United States realized that the stagflation crisis was not caused by a simple external factor, but a concentrated outbreak of chronic illnesses that had accumulated in the US economy over a long period of time.

After the Great Depression, the Keynesian economic stimulus policy implemented by the U.S. government for a long time resulted in a large excess of currency and a decline in market vitality.

Volcker's view is that although inflation is very high, the first thing that should be solved is the exchange rate issue. His original words are:

"The strong and stable US dollar compounded the interests of the United States and the world." But the price is slowing domestic economic growth. When you are faced with the credit needs of companies that are waiting to be fed because of high inflation, this decision is never easy. "

In August 1979, he was appointed Chairman of the Federal Reserve by then President Jimmy Carter.

This man who is 2 meters tall, has a sloppy appearance, smokes cheap cigars, and looks for cheap Chinese restaurants. At first, let alone other government officials, even he himself did not expect that he would be entrusted by President Carter to the United States at the time. The economy is "a mess."

Less than 10 days after Volcker came to power, he began "dramatically" remediation. The former chairman was still hesitant to raise interest rates by 0.5%, but when he came to him, he directly increased the interest rate from 10% to 15%.

This interest rate is the highest in 65 years, just when the US market was still in shock, soon! The surprise is yet to come. In January 1980, the inflation rate in the United States reached 16.8%, which is unprecedented and has never come.

Volcker is no mercy, and the interest rate has reached 20% of the unprecedented, no one in the future.

Within three months, the total economy of the United States, like a free fall, plummeted by 10%. President Carter's political career, as interest rates skyrocketed, he also "goed to heaven", and was "launched" to heaven by the chairman of the Federal Reserve appointed by him.

Raising interest rates makes Volcker a target for domestic entrepreneurs, because it means an increase in the cost of credit. At the same time, the tightening of monetary policy means that many people's living burden will increase.

The financial market went into chaos and interest rates soared. Due to tight liquidity, there was a serious inversion of short-term and long-term interest rates. This anomaly caused a large number of currency speculators to suffer huge losses or even bankruptcy. Among the financial predators who "friction" is Soros.

Even if the voices of opposition to Volcker from outside were higher and higher, the tall man still insisted on his policy, and he was waiting for the test of time.

In the winter of 1982, the U.S. economy and the world economy entered a historic turning point. After nearly a decade of downturn, the U.S. stock market has begun to pick up.

In 1983, the inflation rate dropped to 3.2%, and in the following two years it was around 4%. In 1986, it dropped to 1.9%. The degree and speed of the decline in the inflation rate far exceeded the predictions of the ruling and opposition parties and aides, and the economy began to pick up in the coldest winter.

When Reagan came to the presidency, he continued to appoint Walker as chairman of the Federal Reserve in 1983. After his four-year term expired, Walker rejected the third term and returned to Princeton University to teach economics.

If you think that this old man who once turned the US economy upside down has completely retired, then you are really sorry for the term "old and strong".

In 2009, after the outbreak of the global financial crisis, Volcker served as the chairman of the US President’s Economic Recovery Advisory Committee.

On January 21, 2010, U.S. President Obama announced that he would make major reforms to the U.S. banking industry and adopted the 82-year-old financial veteran Paul Volcker’s proposal, so his plan was called the "Volcker Rule."

It can be simply understood as "no state-guaranteed money for high-risk investment".

In fact, the position given by Obama is a vacant position. He just wants to use Volcker's prestige to achieve the goal of calming people's hearts. At this time, Volcker was very old and no longer had the physical strength to "enemy the world".

"I want to tell you clearly that if banking institutions still rely on taxpayer money to provide protection and continue to speculate at will, the crisis will still occur. I am old, I am afraid that I will not survive the day when the crisis returns, but mine The soul will come back to haunt you!"

It is a pity that Volcker, who passed away in 2019, failed to see the "magic situation" of the U.S. stock market in 2020. I wonder if his descendants (especially the Fed Chairman Powell who was made by Trump like a puppet) will not Will remember his warning.