Deagle's population forecasts - Do they have any merit? 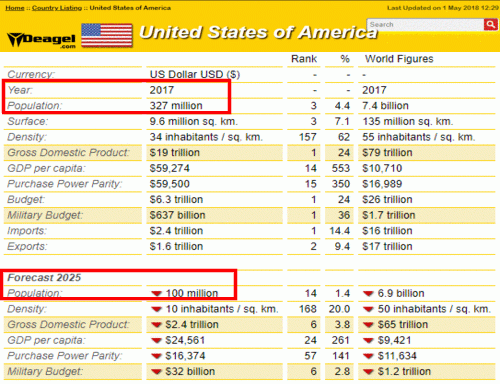 This morning, I bring my head up out of the polarizing events of this past month, and take a look at the international geophysical situation. A friend reminded me of deagel's population forecasts. They've updated them since I last checked their website a year ago or so. The United States is, supposedly, going to reduce its population from 330 million people to 99 million people by 2025. Most countries will lose population, although not by nearly as much, yet some will increase their population, such as India.

I think about what would cause such a thing. It can't be an infectious disease pandemic (although that is scheduled for 2022), because that would reduce India's population. So I took another look at the countries. It hit me, that the countries which are slated by deagel to lose the most population are the ones which are the most dependent upon oil to keep their people alive. Oil is necessary to create the United States' fertilizers and pesticides. Oil is necessary to create the United States' entire medical system from manufacturing drugs to transportation to the IV lines to the labels and containers and tubes which medication, all of it, is stored in. Oil is necessary to drive food to the grocery stores so people in the cities don't starve. Oil is necessary for the communications and electrical grid to function at scale and be maintained when it breaks.

Deagel said that first world nations aren't resilient. Well, they're not. Complexity is fragile, and The Great Reset just makes it worse. Imagine the rest of the world wanting to burn the United States like the Reddit autistic nerd herd wants to burn Hedgefunds, because they've outlived their topdog status and showed geopolitical weakness of internal strife and vulnerability. It's just a matter of what goes around comes around combined with as above so below.

You guys also know that predictions are not threats, nor are they things I necessarily desire or feel an obligation to carry out. I don't want that many people to die. It's just that their deaths are likely, given the geopolitical events about to unfold, and their lack of antifragility.