China's 70 billion chip giant stocks fell to the limit, and the mentality of 130,000 shareholders exploded!

China's 70 billion chip giant stocks fell to the limit, and the mentality of 130,000 shareholders exploded! Recently, more and more individual stocks have flash crashes, and today it is the turn of the 70 billion market capitalization chip giant Ziguang Guowei. 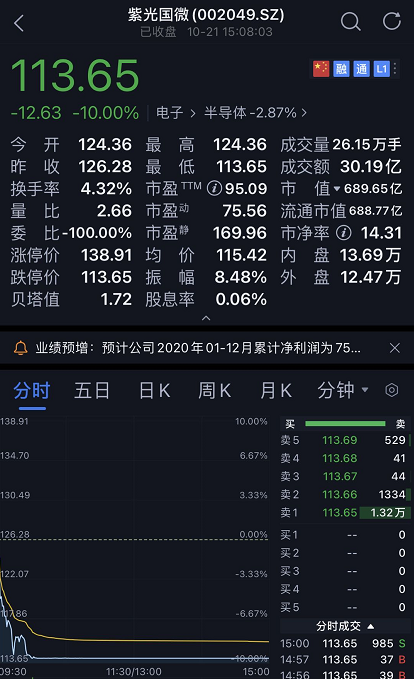 In early trading today, Ziguangguo opened slightly lower, and then quickly plummeted by 8%. Less than half an hour after the opening, it was hit by a huge selling order. The stock price also fell from 124 yuan/share to 113 yuan/share, and its market value shrank by more than 7 billion. .

As of the close of the market, Ziguangguo had closed the limit down, with over 10,000 orders, reported at 113.65 yuan, the turnover exceeded 3 billion yuan, and the turnover rate was 4.32%.

According to the official website, Ziguang Guowei is mainly engaged in the design and sales of integrated circuit chips, including smart security chips and special integrated circuits. The two core subsidiaries of Ziguang Tongxin Microelectronics Co., Ltd. and Shenzhen Guowei Electronics Co., Ltd. . In addition, the company is also engaged in the business of power semiconductor devices and quartz crystal components. It is a leading provider of integrated circuit chip products and solutions. Its products and applications are spread all over the country and abroad. It is mainly Core business areas such as power semiconductor devices and ultra-stable crystal frequency devices have formed a leading competitive situation and market position.

Net profit in the first three quarters increased by nearly 90%

As of yesterday's close, Ziguang Guowei has risen nearly 150% since the beginning of this year. On August 7, it hit a record high of 160.8 yuan. On the evening of 20th, Ziguang Guowei released the report for the third quarter of 2020. In the first three quarters, the company achieved operating income of 2.320 billion yuan, a year-on-year increase of 23% after deducting the impact of changes in the scope of consolidation; net profit attributable to shareholders of listed companies was 685 million yuan, a year-on-year increase of 87.51%; non-deductions attributable to shareholders of listed companies Net profit was 624 million yuan, a year-on-year increase of 66.57%. Looking forward to the full year, the net profit is expected to reach 751 million to 872 million yuan, an increase of 85% to 115% year-on-year. The company said that in the third quarter, the company's innovative business has made significant progress. In the field of automotive electronics, it has successively reached strategic cooperation with the National New Energy Vehicle Technology Innovation Center and China National Automobile Zhilian. As a member of the alliance, it has joined the "China Automotive Chips" initiative jointly supported by the Ministry of Science and Technology and the Ministry of Industry and Information Technology and led by the National New Energy Vehicle Technology Innovation Center. Industrial Innovation Strategic Alliance". The company is planning to issue convertible corporate bonds, of which 450 million yuan will be used for vehicle controller chip research and development and industrialization projects to continue to expand the automotive electronics industry. In the field of industrial Internet, Ziguang Guowei takes the lead, and cooperates with Ziguang Zhanrui, Ziguangyun and other companies to win the bid for the "Industrial Internet Innovation and Development Project in 2020-Large-scale Industrial Internet Identity New Connection Platform" project by the Ministry of Industry and Information Technology, and officially enter the industrial Internet trillion yuan Meta-scale market.

Ziguang Guowei Chairman and CEO Ma Daojie said that as a domestic smart chip leader, Ziguang Guowei has developed rapidly in recent years and maintained rapid growth. Especially this year, facing the severe test of the new crown pneumonia epidemic, the company's first three quarters Performance and profits maintained growth, and business showed a steady and healthy development trend. The company will continue to consolidate the leading advantages of smart security chips, while actively deploying in emerging fields such as automotive electronics and industrial Internet.

There are several theories in the market as to why the limit is lowered. The first is that the performance of the third quarterly report is not as good as expected, but the growth rate of the third quarterly report not only hit a record high for the same period in history, but also in line with expectations. This notion that it is lower than expected seems to be untenable; the other is that Good cash, capital shipment. 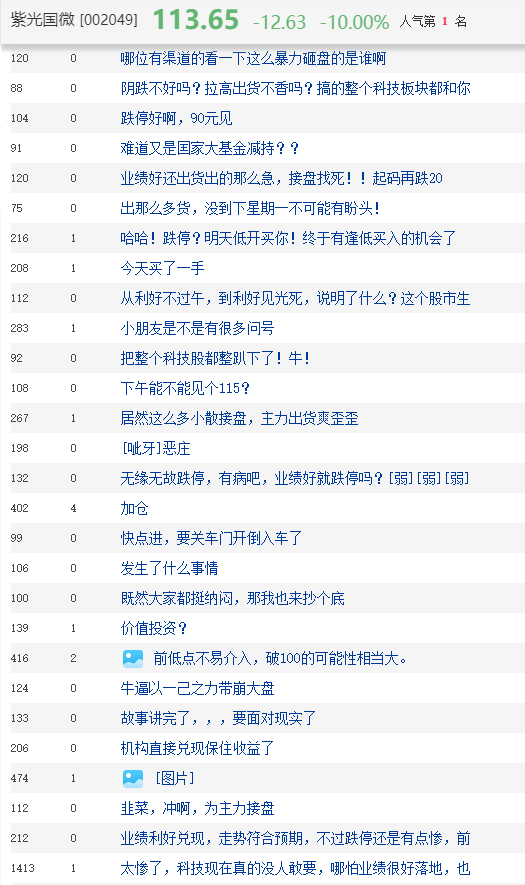 Some analysts pointed out that the market’s expectations were too high or the main reason for the stock price crash.

In addition, the brokerage also gave a positive view when commenting on the third quarterly report and maintained a "buy" rating.